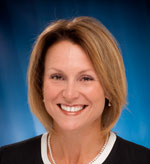 Melissa Pederson has worked at Wescom Credit Union since 1990 and serves currently as the Vice-President of Branch Operations - Region I, a role she has held since 2006. She is a graduate of Western CUNA Management School (2006) and completed the Advanced Leadership Program through the USC Marshall School of Business (2005). Melissa leads a network of 11 branches to success by identifying methods to best serve the membership, and those who live and work in southern California, through the vast product and service line available.

During her tenure at Wescom, Melissa has been an active participant on the Board of the Wescom Credit Union WeCare Foundation since 2000. The WeCare Foundation was founded by Wescom employees in 1999 as a charitable, not-for-profit organization designed to help people in need through charitable giving and volunteerism. In that time, they have raised and distributed nearly $2 million dollars through employee contributions and participated in hundreds of events. Melissa currently serves WeCare as their Secretary and has served as Chair, Vice-Chair and Treasurer.